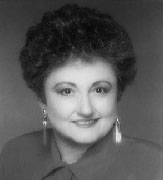 Various factors play a role in the development of an author. For Trish Macdonald Skillman, some of those factors were these:

Trish began plotting murder and mayhem at an early age. As an only child, the most important activity of the day began after tea parties and baseball games ended and playmates went home.

Such were the flights of childhood imagination that laid the foundations that led to Trish’s Dell suspese novels Someone To Watch Over and Buried Secrets, and her latest work, Writing the Thriller, a March 2000 release from Writer’s Digest Books.

Along the way, Trish raised a daughter and son whose relatively uneventful childhoods added little to her knowledge of legal systems or prison procedures. Her supportive husband provided no research opportunities into domestic violence. Luckily, her 25-year banking career sparked enough murderouis thoughts to lend some personal insight into the criminal mind.

A member of Sisters in Crime, Mystery Writers of America, and Oklahoma Writer’s Federation, Inc.,Trish has also edited and published Quick Reference Rules for English Grammar, drawn from instruction she and her mother received from the same high school English teacher.

A native of Shelbyville, Indiana, Trish and her husband now live in New Braunfels, Texas, where she is working on a new project. Watch this site in the coming months for updates.